UTAH COUNTY, Utah, Aug. 1, 2019 (Gephardt Daily) — A Payson man has been booked into the Utah County Jail on multiple felony charges after sheriff’s officials say he kidnapped a woman in a stolen vehicle and nearly ran over multiple law officers while evading arrest.

Nicholas Gene King, 42, was booked on suspicion of:

A probable cause statement filed by an officer of the Utah County Sheriff’s Office says that on Sunday of this week, officers were working at an injury accident scene in Payson County, and had unrelated traffic passing the scene in a single lane, alternating turns between northbound and southbound vehicles.

King was southbound when he approached the scene at a high rate of speed, and hit his brakes, attempting to slow down fast and cut into the northbound lane, the statement says.

“Deputies were able to get the male driver and female passenger stopped and were speaking with the driver for a moment,” it says. “A deputy was standing at the driver’s window with both hands on the door at waist height, and at that time, the car fled. The deputy had to jump out of the way to keep from his feet from being run over.

“Another officer was outside his vehicle near the front left of his patrol car when the defendant fled. The officer made eye contact with the defendant and had to run out of the way toward the rear of his vehicle to avoid getting hit by the fleeing vehicle.”

The officer was in full uniform and was next to his fully marked Payson Police vehicle.

From the mouth of the canyon, the defendant was observed by several officers driving recklessly, running stop signs and speeding, the statement says. A deputy was able to catch up and get the license plate number.

“The defendant continued through the streets of Payson. The deputy was able to keep a visual on them without pursuing. This deputy observed the female passenger several times open the door and could see her legs outside the door jam, apparently, in an attempt to get out of the vehicle. This happened a few times until she actually jumped from the vehicle.”

The passenger who jumped out of the car while it was going an estimated 40 mph was was seriously injured, and required treatment at a local hospital, the statement says. She needed several staples to her head to close a wound, and care for road rash to her arms, legs and other parts of her body.

“At the hospital, a deputy interview the female passenger/victim. She told the deputy that she had been yelling at the male continuously to stop and let her out of the car. He would slow down from time to time and she was open the door to jump out and he would immediately speed up quickly and laugh. It was apparent that she was being held against her will as he would not slow down to a speed she felt it was safe to get out of the car, however each time the defendant would rapidly accelerate, which would force here to stay in the car.”

Soon after the woman jumped, the defendant, later identified as King, encountered another deputy. King stopped, got out of his vehicle, and ran on foot, the statement says. He fled into a field and hid under a trailer, and was not immediately located.

Officials searched the abandoned vehicle looking for anything that would identify the driver, but found nothing with a name, the statement says. They did find a glass pipe with burn marks and a white substance that later field tested positive for methamphetamine.

Officers learned the vehicle had been stolen earlier in the day, but not reported. The owner identified King as the person who took the car, and the woman who jumped from the speeding vehicle identified King by name and photo as the driver.

King was located about an hour after he fled, the probable cause statement says.

“The defendant told the officer that he had smoked methamphetamine a few days ago, however, the female passenger/victim told an officer that they both had smoked it earlier that day.

“The defendant told the officer that he did not steal the vehicle, but was given it by the owner because he was doing work at her house and needed to pick items up from the store. He did indicate that he had it beyond the time period that she had allowed him to have it.”

A test of King’s urine came back positive for THC and meth. Results of a blood test are pending.

The defendant has prior convictions for unlawful possession of a schedule I or II controlled substance. A search of Utah County Jail records shows that King has now been booked into the jail two dozen times since 2006. 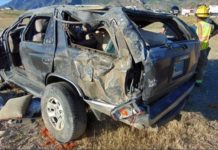