SALT LAKE CITY, Utah, Jan. 8, 2020 (Gephardt Daily) — A Salt Lake City Police officer fired one or more rounds at a suspect believed to be in a stolen car, hitting the suspect and causing injuries that sent him to the hospital, a department spokesman said late Wednesday afternoon.

Sgt. Keith Horrocks, SLCPD, told reporters at the scene, near 1500 W. North Temple, that at approximately 3:40 p.m., officers came in contact with the man in a stolen vehicle.

“In approaching that vehicle and making contact with the driver, at least one round was fired by an officer,” Horrocks said.

“The driver of that vehicle was a 20-year-old white male. Our officers rendered medical aid to the driver on scene until emergency medical services could get there. That driver was transported to a local area hospital with non-life-threatening injuries.”

Horrocks said the initial investigation remains open, and in keeping with OICI protocol, another agency — in this case the Unified Police Department — will be leading that investigation. Horrocks said that as updates are cleared through UPD, police will share additional details.

Gephardt Daily is on the story, and will publish more details as soon as they are available. 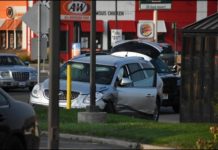