SALT LAKE CITY, Utah, March 14, 2018 (Gephardt Daily/UPI) — Hundreds of students in Utah joined others across the United States walking out of school Wednesday on the one-month anniversary of the mass shooting at Marjory Stoneman Douglas High School in Florida.

The National School Walkout began at 10 a.m. Eastern Time and continued across the country at 10 a.m. in each time zone.

More than 3,100 schools participated in solidarity with the Parkland, Fla., school where 17 students and faculty members were killed, police say by 19-year-old former student Nikolas Cruz, who opened fire on Valentine’s Day with an AR-15 assault rifle.

Schools in Utah that took part in the “walk out” event included East, West, Highland, East Hollywood High, Rowland Hall-St. Marks, Cottonwood, Alta, Olympus, Westlake and Madeleine Choir as well as junior high schools including Hillcrest in Murray, and elementary schools including Emerson in Salt Lake City. At one elementary school, a “kind letter (was sent) letting parents know no one would be reprimand for walking out,” said one parent.

Some students in Utah clasped hands, while others marched. East High School students proceeded quietly from their school at 840 S. 1300 East down 800 South.

Salt Lake Mayor Jackie Biskupski joined the students at West, at 241 N. 300 West, tweeting: “Helping @WestHighSLC students get registered to #vote this morning during #NationalWalkoutDay. Our children are the future and demand change. It is our responsibility to support them and press for the end of school and gun violence.”

A parent at West, whose video is seen above, wrote on Facebook: “Kids are silent as student leaders read names and tell stories about victims. Balloons are being released in honor of each victim in Florida.”

In south Florida, at least 25 high schools and colleges joined the demonstration. At Stoneman Douglas, students gathered on the football field for a 17-minute walkout where the original song “Shine” composed by the drama club played.

New York Gov. Andrew Cuomo lay down side-by-side with students for a “die-in” protest at the Leadership and Public Service High School in Lower Manhattan.

“America’s students can clearly see what the GOP cannot: Weak gun laws are at the heart of America’s gun violence problem,” Cuomo tweeted. “Proud to join the students at Leadership and Public Service High School.”

In Washington, D.C., students clutched signs and gathered outside the White House and on Capitol Hill chanting “Enough is enough.”

Other students chanted “Hey Hey NRA, how many kids have you killed today?” in D.C.

Students in Hoboken, N.J., chanted “I am a bullet-free zone” and carried signs reading “Chalk not Glocks.” At Cherry Hill West High, another New Jersey school, students laid out bags in the shape of a heart.

Students at Baltimore Polytechnic Institute laid down as a group on the football field.

In Los Angeles, students are expected to organize voter registration drives and moments of silence. Many will wear orange in honor of the Wear Orange campaign associated with National Gun Violence Awareness Day.

Stoneman Douglas student Sam Zeif marveled to CNN about a “sea of people everywhere. You can barely see the ground. It really shows us we’re not alone.”

Although some schools and districts threatened students with punishment for leaving class, students vowed to walk out anyway.

“I am worried about it, but I would rather fight for what’s right than a little suspension,” Sayreville County student Sydney Calder told CBS New York.

The nationwide walkout was organized by student members of Empower, the youth branch of the Women’s March group.

“We are living in an age where young people like us do not feel safe in our schools. This issue is personal for all of us, especially for those of us who are survivors of gun violence,” the group’s website states. “We are walking out for ALL people who have experienced gun violence, including systemic forms of gun violence that disproportionately impact teens in black and brown communities.”

The law orders a ban on bump stocks, an increase to the minimum rifle purchasing age from 18 to 21 and a three-day waiting period on all firearm purchases.

Some of the money will be allocated to hire and train more school resource officers and mental health counselors and install extra safety equipment, like security cameras, metal detectors, bulletproof glass and automatic locking devices.

It also includes funding for an optional program to allow some school personnel — like librarians and coaches, but not teachers — to carry firearms on campus.

The U.S. House of Representatives is scheduled to vote this week on the STOP School Violence Act of 2018, the first major congressional vote on school safety since the shooting.

The Senate Judiciary Committee is holding a school safety hearing Wednesday at the Capitol.

President Donald Trump‘s administration released its own list of proposals to improve school safety Sunday night, including “rigorous” firearms training for some school officials, support for a bill to strengthen background checks for gun purchasers and the creation of a task force to study school shootings.

The proposal didn’t include support for raising the age limit to purchase certain firearms, which Trump earlier indicated he favored, but White House press secretary Sarah Sanders said the idea was still being considered.

On Monday, the Department of Justice introduced a package of directives from Attorney General Jeff Sessions calling for federal agencies to verify they are in full compliance with an existing law requiring them to report relevant records to the National Instant Criminal Background Check System and identify local jurisdictions that are failing to report arrests to their state repositories.

It also called on federal prosecutors to “swiftly and aggressively” prosecute people who are prohibited from possessing firearms but lie to deceive the federal background system when attempting to purchase one.

Prosecutors declined defense attorney Howard Finkelstein’s offer to have Cruz serve a sentence of life in exchange for a guilty plea to the 34 grand jury charges, citing the “heinous, atrocious and cruel” nature of the crimes and the “cold, calculated and premeditated way” it was handled. 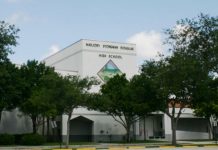