SALT LAKE CITY, Utah, May 15, 2019 (Gephardt Daily) — Police are saying they still have an open and active investigation into a fatal shooting Tuesday night near 200 North and 600 West, but they now have all suspects in custody.

According to Salt Lake City police, the incident began at about 10 p.m. with a home invasion at 245 Rendon Ct.

The 18-year-old male driver of the car that was involved in the home invasion was fatally wounded when someone from inside the home came out and shot at him.

The vehicle was in motion and crashed a short way down the street, tipping onto its side after hitting a traffic island.

Police say the other suspects in the vehicle were able to get out and run away, but they were rounded up a short while later at the nearby North Temple Trax station as officers with K9 units combed the area.

It hasn’t been determined how many times the 18-year-old was hit, but police found several shell casings in the street. They aren’t releasing the name of the deceased because they have been unable to locate family members to notify them of his death.

The other suspects, all male, are 18-year-old Jordan Audinatte and two 17-year-olds who are not being identified because of their juvenile status. All are in custody.

Police said the home invasion appears to be drug-related.

Officers were on scene throughout the night, gathering evidence and talking with possible witnesses; however most neighbors in the area have been reluctant to discuss what, if anything, they may have seen.

The chaos of the night gave way to calm as daylight broke and police left the area, but the investigation continues. 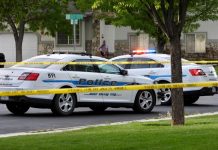 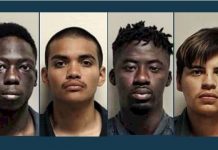