SALT LAKE CITY, Utah, Feb. 25, 2020 (Gephardt Daily) — One man is dead and up to nine other people were transported to hospitals after a car collided with a work van, causing it to roll, on Tuesday morning near Salt Lake International Airport.

“A 12-person passenger was involved in a collision there, and it is believed that 11 occupants were in the van at the time of of the accident,” Horrocks told Gephardt Daily.

Other Stories of Interest:  Woman dies after car-pickup collision in West Haven

Those in the van that rolled are believed to be construction workers who were being transported by their company from one site to another, Horrocks said.

The driver of the other vehicle, who was alone in the car, was not seriously injured, and was not transported to the hospital, Horrocks said.

The accident happened in the area of Amelia Earhart Drive and Wright Brothers Drive, north of Interstate 80, in the industrial park west of the airport. The area will be closed to traffic, possibly until noon, as crews measure remaining evidence and reconstruct the accident scene, Horrocks said.

The name and age of the deceased will not be released until his next of kin can be notified of his death, Horrocks said.

Gephardt Daily will have more information as news breaks. 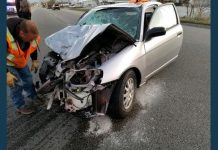