MURRAY, Utah, April 1, 2020 (Gephardt Daily) — A 15-year-passenger was ejected and critically injured in a multi-vehicle collision early Wednesday evening on Interstate 15 in Murray.

The accident happened at about 6:23 p.m. Wednesday, a Utah Highway Patrol statement said. A white Subaru was traveling south on I-15 near 5400 South driven by a 19 year old, with the younger teen riding in the front passenger’s seat.

“Witnesses indicated the Subaru was trying to change lanes between a dump truck and a pumper truck and clipped the dump truck with the driver side rear of the Subaru,” the UPH statement said.

“This caused the Subaru to spin and strike the concrete pumper in the rear corner and tore the passenger door off. The Subaru spun several times and the 15-year old passenger was ejected.

“Medical personnel transported the 15-year old to IMC in critical condition. I-15 is closed at 5300 South for crash reconstructionists to gather evidence for our investigation.”

The Utah Highway Patrol is asking the public to take alternate routes and stay away from the scene. 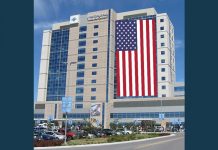