The video above was shared with Gephardt Daily by Amanda Baldonado.

The accident happened in a grassy area outside the Southern Utah University stadium.

“At this time the extent of the injuries are unknown. An investigation is underway.”

Amanda Baldonado, a Cedar City mother of eight, ages 1 through 10, was sitting nearby when the accident happened, and recording the show for one son, who is autistic and disturbed by loud noises and chaotic crowds, to watch later on TV.

One son was in the stadium as part of the ceremony, and her six other children were in the car.

“I had panned down to show the boxes, how the fireworks worked, and two boxes tipped over that were part of the grand finale,” Baldonado told Gephardt Daily. “They were in a huge grouping of tons of boxes.”

The tipped boxes shot fireworks into an area near a fence where several groups were viewing the spectacular.

“One lady was hit in the chest, and another was hit on the side of her head,” Baldonado said. “One lady, it went through the bottom of her leg. And one person, it blew his eardrum.”

The husband of the woman with the leg injury drove her to the hospital, Baldonado said. Medics rushed to the woman hit in the chest.

“She couldn’t breath. I think it was just the power of it. And when she took a breath, it was smoke.”

The woman hit in the leg ran by Badonado’s car, as did the one hit in the face.

Police took down Baldonado’s information since she had a video of the entire incident, she said.

She feels especially lucky because two of her children had been standing at the fence about two minutes prior to the fireworks misfire.

“They were playing on the fence right before, and it would have hit them,” Baldonado said. “They had those fireworks that ‘scream’ as part of the finale, and it got too loud, so the kids (a son, 7, and daughter, 5) came back to the car.”

The whole crew would have been outside if it hadn’t been for a downpour before the show, Baldonado said.

Bandonado said on Saturday morning that her children were fine.

“They’re a little bit scared,” she said. “They slept in our room. They are a little shaken up.” 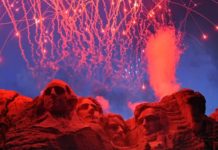