KEARNS, Utah, June 8, 2019 (Gephardt Utah) — The Unified Police Department has made three arrests in the fatal shooting Wednesday in Kearns.

“After tireless hours the Unified Police Department Violent Crimes Unit was able to develop information and make three arrests in relation to the homicide which occurred in Kearns on Wednesday,” a UPD statement says.

Talking to the media, Salt Lake South Sheriff Rosie Rivera said the shooting started a robbery, and the incident also was gang-related. All those arrested were gang members, she said.

The victim has been identified as 34-year-old John Herman Tonga, a Midvale resident. Another man was treated at a local hospital for serious injuries.

According to initial jail booking charges in the June 5 shooting case, the suspects are being held on suspicion of:

Information on Piuila has not yet been entered into the jail computer system. 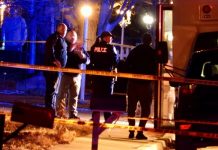