HERRIMAN, Utah, Nov. 23, 2019 (Gephardt Daily) — A suspect is in custody Saturday night after multiple law enforcement agencies responded to the report of a double stabbing at a Herriman residence.

Herriman Police Lt. Cody Stromberg told reporters at the scene that a neighbor of the victims, who live on Midas Gold Road, called 911 at about 5:45 p.m. to report that a man and woman had been stabbed.

When officers arrived, they learned that the suspect had fled on foot, so they established a containment area and requested a K-9 unit to assist in the search.

The victims, both adults, were transported to an area hospital with severe wounds, but are expected to survive, Stromberg said.

Stromberg said the suspect in the stabbing is 52-year-old Thomas Michael Taren.

Taren was apprehended not long after officials set up a containment area and brought in a K-9 unit.

Taren is “very familiar” to police, who have responded to the same address on previous domestic violence calls, Stromberg said, adding that Taren had a warrant for his arrest for similar issues at the residence.

As police and the canine searched the area, they ultimately located Taren hiding in the cold and dark, wearing hardly any clothing.

Officers took Taren into custody and transported him to the hospital to get checked out as a precaution, before taking him to be booked into jail.

Of considerable concern was the fact that Taren had recently been released from jail, and “he had stated that he won’t go back to jail,” Lt. Stromberg said.

As police were searching the area, they had no way of knowing if Taren was still armed when he fled the stabbing scene, but Stromberg said at the time that, although he wasn’t deemed to be a threat to the general public, they considered him to be “dangerous” and should not be approached by anyone other than law enforcement.

Officers from Riverton, South Jordan and Unified Police departments, and Utah Highway Patrol responded to assist in the case.

Double stabbing in Herriman
1 of 7 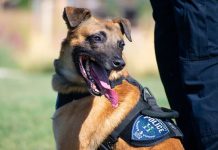 Memorial service Feb. 29 for Herriman K9 Hondo, killed in the line of duty 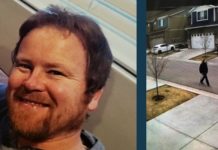