“After conducting an Officer Involved Critical Incident (OICI) review, the Salt Lake County District Attorney’s Office has determined that the Feb. 13, 2020 use of deadly force by a Herriman City Police Department Officer and Department of Homeland Security Officer does not warrant criminal charges,” Gill said in a prepared statement released just before noon on Friday.

“Due to the fact there was not any body worn camera footage to review, we are releasing our decision in the attached letter and not holding a press conference.”

Filion, 41, was known as a violent fugitive, and was a suspect in a February homicide in North Ogden.

A Herriman Police Department K-9, Hondo, was killed in the operation.

The United States Marshals Service released a statement, which said in part:

“During the incident, K-9 officer Hondo, with the Herriman Police Department was killed in the line of duty.”

Immediately below, find a copy of Gill’s report. Below that, see photos shot at the scene or related to the story. 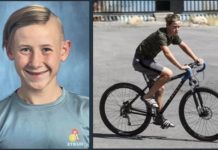