UHP Sgt. Brandon Whitehead said the call came in at 11:25 p.m., reporting a vehicle fire at milepost 96, near the Peterson exit.

“A semi hauling a 50-foot trailer of food products veered out of its lane and hit the concrete barrier a couple times,” Whitehead told Gephardt Daily.

He said both the tractor and the trailer tipped over and slid “at least a couple hundred feet.” The fuel tank ruptured with the force of the impact, and either sparks or the heat set the entire rig on fire.

The driver of the semi perished in the blaze. Whitehead said the man was driving for a local trucking company, but his name is being withheld pending notification of next of kin.

No other vehicles were involved. Whitehead said there was one car behind the semi, and the driver of that vehicle witnessed the crash.

It isn’t known yet what caused the semi to leave its lane and hit the barrier. The Crash Analysis Reconstruction Team is on scene and assisting with the investigation.

Whitehead said the freeway is closed in both directions and may remain closed for several more hours; however, traffic is being diverted off at the exit and then back onto the roadway, so there is no lengthy detour. 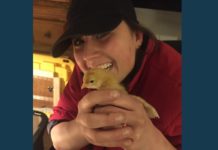