SALT LAKE CITY, Utah, Sept. 25, 2020 (Gephardt Daily) — A lawsuit has been filed against the Salt Lake City Police Department, Chief Mike Brown, and others, in behalf of the family of Bernardo Palacios-Carbajal, the man who was shot and killed while fleeing police after reports of an armed robbery in the spring of 2020.

Palacios-Carbajal, 22, was killed at about 2 a.m. May 23, after SLCPD officers were dispatched to the vicinity of 900 South and 300 West.

The lawsuit, filed by attorneys for the Palacios-Carbajal family, alleges the responding officers, were pursuing “a Hispanic male,” when they saw Palacios-Carbajal and attempted to apprehend him without identifying themselves.

The lawsuit maintains two officers, Kevin Fortuna and Neil Iversen, initially fired their weapons at Palacios-Carbajal, despite being ordered by a police sergeant to “taze him.”

Salt Lake County District Attorney Sim Gill ruled on July 9 that the shooting was justified, and the officers involved would not face charges.

Gill cited interviews in which the SLCPD officers said they feared for their lives after Palacios-Carbajal appeared to raise a gun he had dropped and retrieved three times before slipping and falling in a rainy parking lot.

According to investigators, the officers fired 34 shots between them, 13 to 15 of which struck Palacios-Carbajal. The lawsuit, however, states that post-mortem reports showed a total of 25 gunshot wounds.

Protesters splattered the building and street with bright red paint, while others smashed widows. Scuffles broke out as police moved in, and at least two officers and as many demonstrators were injured.

Seven demonstrators were ultimately charged with felonies and are awaiting trial in the aftermath of the July 9 rioting.

The lawsuit filed Friday by Palacios-Carbajal’s family seeks monetary and other forms of compensation.

March for Bernardo Palacios-Carbajal
1 of 49 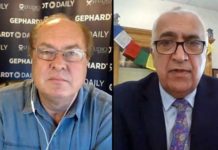