SALT LAKE CITY, Utah, May 22, 2019 (Gephardt Daily) — More than two months after Montana Highway Patrol Trooper Wade Palmer was shot and critically injured, and flown to the University of Utah Hospital for emergency surgery, he is returning to his home state.

Palmer and wife Lindsey were escorted to the airport Wednesday afternoon for the medical flight home. But not before Lindsey Palmer thanked her husband’s caregivers at the U of U at a news conference.

“We have missed him so dearly,” she said. “We still have more therapy in the future.” But thanks to the treatment from doctors, and the “kind words, prayers and support” from Utahns and people around the world,” she said, adding “the future is brighter today than when we landed here in Utah. Thank you all.”

Trooper Palmer was flown to Utah after being shot multiple times while on duty on March 15. He was searching for a suspect wanted in another case in which a man shot three people and killed one. Palmer had radioed for support after finding the suspect’s car outside a Missoula business.

When officers arrived, they found Palmer still seat-belted in his patrol car after being shot at least three times, in the neck, face and head, according to Montana Highway Patrol information released at the time. Johnathan Bertsch, 28, was later arrested in the case.

After initial treatment at a nearby hospital, Palmer was flown to University of Utah Hospital because of the quality of its brain-trauma facilities and specialists.

“Patients with  severe traumatic brain injuries should go to centers in which there is a bevy of doctors, nurses, capabilities, 24-7 imaging to make sure patients have best possible outcome,” Dr. Ramesh Goel, one of a team of neurosurgeons who worked on Palmer’s case.

Geol said that Palmer’s traumatic, penetrating injury was on the left side of his brain, which, in right-handed people, controls speech. Palmer remains unable to speak.

The highest priority upon Palmer’s arrival was to relieve pressure on his brain, preventing additional damage that would have been caused by continued swelling inside his skull. Surgery on Palmer’s skull helped relieve that pressure.

Montana Highway Patrol Sgt. Sean Finley said that although Palmer cannot speak, he has shown signs of recognizing people, and seems to have retained his sense of humor.

“It surprises us everyday with how he interacts with people,” Finley said.

Palmer will begin the next phase of his recovery at a Montana facility.

MHP Col Tom Butler said that being critically injured in the line of duty is every law enforcement officer’s worst fear, and that Palmer has not been out of his thoughts.

“(We are) just so happy, he’s in the shape he’s in today, because when this occurred, it did not look that promising.”

An emotional Montana Attorney General thanked all Utahns who helped in large and small ways.

“I am authorized, on behalf of the people of Montana, to say, ‘Thank you, Utah. We love you. You are now all honorary citizens of the state of Montana.” 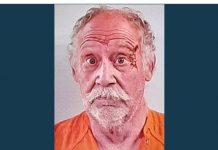