The incident began at about 5:15 p.m. when the Emery County Sheriff’s Office Dispatch Center was called regarding someone possibly driving under the influence, a Utah Highway Patrol news release says.

When an Emery County Sheriff’s deputy pulled the vehicle over, the male driver got out and pointed a handgun toward the deputy, the news release states.

The driver then got back into the vehicle and fled, with the deputy in pursuit as more units responded to assist.

A  UHP trooper deployed spikes on the suspect vehicle, and a short while later the driver stopped, and the pursuing officers stopped behind the vehicle.

The male driver again got out of the vehicle and pointed the gun in the officers’ direction.

“An Emery County Deputy and UHP Trooper involved in the pursuit fired their duty weapons, striking the male. Officers and EMS personnel attempted lifesaving measures, but the male was pronounced dead a short time later,” the release says.

The Carbon County Sheriff’s Office, as an outside agency, is handling the investigation into the incident as required by Officer Involved Critical Incident (OICI) protocol. The State Bureau of Investigation is assisting.

It is still early in the investigation, and more information will be released as additional details are clarified. 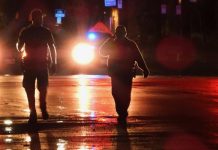