A third kayaker, who made the initial call for help, was located and has been brought to safety, Davis County Sheriff’s Office tweeted.

The other two kayakers, both 20-year-old men, are still missing. They are wearing only T-shirts and shorts, the tweet says, and none of the kayakers had life jackets.

DCSO said the three kayakers went out on Wednesday, planning to go from Stansbury Island to two other islands and then Antelope Island.

Around 3 p.m. Thursday, they lost sight of each other. One of them reached the northwest corner of Antelope Island at about 7 p.m. and called for help, the sheriff’s office said.

“Search and Rescue is saturating the coves and beach heads,” DCSO tweeted. “In addition to Search and Rescue volunteers, @DavisCountySO has a deputy on a boat w/DNR and one deputy is on land — both are ready and able to provide medical care if needed.”

Winds of 20 miles an hour and 7-foot-high waves are presenting a challenge, and the temperature is dropping, DCSO said.

DPS sent out a helicopter, and then a second one, so the first could refuel. 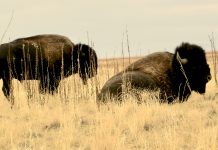 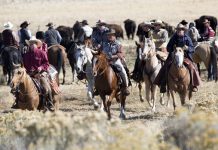