CLEARFIELD, Utah, Oct. 9, 2018 (Gephardt Daily) — A 35-year-old man is in custody after police say he was found under the Interstate 15 Clearfield overpass, pulled out a gun, and fled onto I-15, causing a standoff that blocked rush hour traffic for nearly four hours on Monday night.

In addition, suspect Christopher Scott Lewis was found to be in possession of methamphetamine and drug paraphernalia, and had illegally cut off a judge-ordered ankle bracelet.

Lewis is being held in the Davis County Jail on hold for Adult Probation and Parole, and has been booked on suspicion of:

Lewis is being held without bail.

The incident began at about 5:30 p.m. in Clearfield when officers, investigating a nearby traffic accident, were notified of a man who appeared to be sleeping under the 650 North underpass.

“When I made contact with the male, he was slumped over drooling on the ground,” said Officer Travis Glen Collings, Clearfield Police Department, in a probable cause statement.

“I shook the male and he woke up. I asked him if he was alright. He said he wasn’t sure then later said he was fine. I asked the male for identification. I identified him as Christopher Lewis.”

Lewis admitted he was a drug user, and agreed to be checked out by medical personnel, the statement says. He admitted a burnt spoon found in his backpack was his, and said the tract marks on his arms were from drugs, saying he had most recently used the night before.

Other Stories of Interest:  Update: Woman driving on I-15 shoulder critically injured in Draper accident

Collings told Lewis to wait while he completed the accident investigation, and Lewis agreed, but later tried to walk away. Collins told him to wait or he would be arrested.

“After I finished my investigation, I told Christopher to walk to the back of my patrol car so I could talk to him,” Collings’ statement says.

Lewis eventually fled to I-15, and officers set up a containment area to protect drivers and the nearby Hill Air Force Base. Traffic was blocked off in both directions and all lanes, and on ramps were blocked by additional police cars.

Negotiators worked with Lewis as armed SWAT team members stood by. Lewis was taken into custody at about 9 p.m., and the roadway was opened to traffic as soon as the scene was documented.

Lewis was booked into jail at 10:36 p.m., according to records. Collings later found meth among Lewis’ possessions. 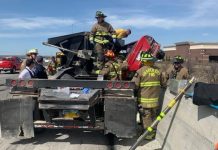 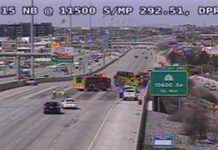