SALT LAKE CITY, Utah, Feb. 14, 2020 (Gephardt Daily) — The United States Marshals Service has announced the name of the fugitive who was shot and killed Thursday when he reportedly pulled a gun on officers trying to arrest him.

The man killed was Brian Francis Filion, 41, whose last known residence was Salt Lake City. Filion was known as a violent fugitive, and was a suspect in a February homicide in North Ogden.

A Herriman Police Department K-9 was killed in the operation.

“At the time of the incident, officers were pursuing a violent parole fugitive. The fugitive was also a suspect in a Feb. 8, 2020 homicide in North Ogden. The North Ogden Police Department and Adult Probation and Parole had requested assistance from the USMS to help locate the fugitive.

“Hondo was a warrior, and due to Hondo’s heroic actions, the lives of his human partners were likely saved today,” United States Marshal Matthew D. Harris said.

In keeping with officer-involved critical incident protocol, the case will be investigated by an outside agency, in this case the Salt Lake City Officer-Involved Critical Incident Protocol Team. 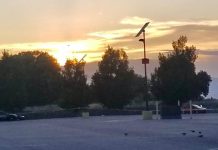