When confronted by police, Terek Wesley Fleming, 21, told police it was a joke.

Fleming was booked into the Salt Lake County Jail on Wednesday on suspicion of two counts of threat of terrorism, one classified as a third-degree felony and one as a class B misdemeanor.

Fleming sent online messages on Tuesday to a woman he knew in Sanpete County, and the woman forwarded them to police there, who forwarded the messages to Unified Police, because Fleming is a Midvale resident, his probable cause statement says.

“I reviewed the messages and found Terek was advising (the woman) to kill her husband and make it look like an accident,” says the statement, filed by an officer of the Unified Police Department.

“Terek also made several suicidal statements where he stated plans to kill himself. One such plan stated by Terek was to ‘possibly shoot up a children’s hospital and then take my own life.'”

Law enforcement agents notified Shriners Hospital and Primary Children’s Hospital, and hospitals in Sanpete County. All were placed on lockdown or heightened security for a period of 13 hours.

“Terek was located, taken into custody and transported to IMC Hospital in Murray, Utah,” the statement said, adding it was a “pink sheet admit,” meaning it was a mental health admission.

Post Miranda, Fleming agreed to speak to the officer, the statement says. The officer showed Fleming a copy of the messages from Tuesday, and Fleming admitted sending them.

“He advised me the statements were made as a joke and he was not serious,” the probable cause statement says. “I advised him of the gravity and seriousness of the threats made toward children’s hospitals, and advised him about the lockdown protocols in place.

“I also confronted Terek about his statements advising her to kill her husband and make it look like an accident, as well as threats he made to kill his ex. There was no clear statement of Terek joking or not being serious about his threats to kill.”

Upon release from the hospital, Fleming was booked into jail without incident. His bail is set at $5,000. 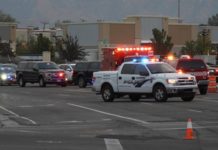