West Valley City Police spokeswoman Roxeanne Vainuku said in a news release Wednesday morning Kennedy Lund, 23, has been booked into the Salt Lake County Jail on two charges of homicide. At this time, there is no known motive for the shooting. Officials said Lund has no known criminal history.

“Officers arrived and discovered that the suspect in the case had shot two people, killing them, then gone across the street into another home which is owned by a family member,” the news release said.

Investigators have interviewed witnesses and determined that the suspect lives, with family members, at the address where the incident took place.

A man and two others, Gerber and Barron, live in a trailer on the same property.

“Reports indicate that the man who lives in the trailer was outside with his children when Lund, who was not clothed and was carrying a gun, approached the trailer,” the news release said.

“The man inquired what was happening and took his children inside the trailer.”

Gerber and Barron then exited the trailer, officials said.

“Witnesses report that there was no exchange between Lund and the pair, but that Lund opened fire, shooting Gerber and Barron and killing them both,” the news release said.

Investigators have interviewed witnesses in the case, however, due to medical concerns, officials have not been able to interview Lund. An interview with Lund will be attempted later on Wednesday.

The murder weapon, which was photographed lying on the street, appeared to be an AR-15 with a laser site, according to investigators. 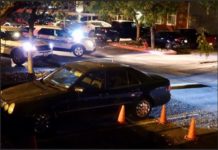 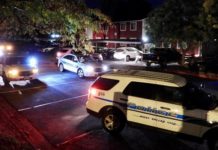 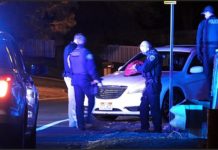