COTTONWOOD HEIGHTS, Utah, March 21, 2019 (Gephardt Daily) — One fatal crime scene led to a second one Wednesday night after police say a man wanted in a Midvale shooting homicide turned the gun on himself miles away, in Cottonwood Heights.

Unified Police officials were called to the first scene, a Maverik convenience store at 7728 S. Main St., at about 9 p.m.

Several police agencies believed they had seen the suspect vehicle, Gray said later. When Cottonwood Heights police saw the Jeep Wrangler shortly after 11 p.m., they were able to keep it in their sight.

“That vehicle rolled and crashed, and the driver of that vehicle is deceased from a what appears to be a gunshot wound which is self-inflicted.

“This is the vehicle that was used in that shooting, so the suspect, we anticipate, is the person that is in that vehicle.”

Gray said detectives were being called to the scene to determine the exact sequence of events and collect evidence to be used in the investigation.

“He is not a threat to the public. He is deceased, and this (crime scene evidence) should be removed before school is started,” Gray said regarding the crash location, near a schoolyard.

Gray said with both men dead, it might take longer to determine a motive in the first shooting, “and what led them together.”

No evidence had come to light yet to make police suspect the shooting was gang-related, Gray said from the second scene.

Unified Police have not yet released the name of either of the deceased men. 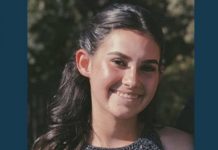