Follow Up Statements on Investigation of K9 Apprehension Program

SALT LAKE CITY, Utah, Sept. 25, 2020 (Gephardt Daily) — Salt Lake City Police Chief Mike Brown announced Friday that 27 cases involving canine use of force, dating back to 2018, have been reviewed, and 18 of those cases will be referred to the district attorney’s office for further investigation and possible criminal charges against the police handlers of the K-9s.

The officers involved in those 18 cases have been placed on administrative leave, Brown said.

“The culture of abuse that we seem to see in these canine cases ends here and now,” Mendenhall said.

“I’m standing here today with a heavy heart and a determined mind…. I am not afraid. We are not afraid. Even when the reality of our actions may bring heartbreak and disappointment to the good people of this department, Salt Lake City corporation and to the public that we serve. We will not tolerate an abuse of power that harms the people we serve and harms the reputations of our good officers who are dedicated to serving in a fair, accountable and a transparent way.

“I truly believe that sunshine is the best disinfectant, and we’re here today to shine a light on this stain in our department.”

The investigation followed the release of body camera footage in August. The video appeared to show a SLCPD K-9 officer repeatedly ordering his K-9 to attack suspect Jeffrey Ryans, after Ryans, who is Black, was prone on the ground and complying with the officer’s orders.

Ryans’ attorney said the dog bites required surgery, and may leave him with a permanent disability. The video of the attack went viral, and was viewed around the world.

Mendenhall said the SLCPD’s K-9 program, which is currently suspended, will remain that way indefinitely, and will be restored only if convincing evidence shows it can be reformed.

“We have found a number of cases we believe merit further review and investigation. Today, those cases have been referred to the district attorney’s office, the department’s attorney affairs office, and the civilian review office.”

All officers in the 18 cases have been placed on administrative leave, Brown said, adding that video in the cases will be released within 10 business days.

The investigation followed the release in August of body-camera video of an April 20 incident in which suspect Jeffrey Ryans was assaulted by a police K-9 on the orders of its handler. The video, which went viral, appears to show the officer continuing to order the dog to bite Ryans, who is a Black man, long after Ryans was prone on the ground and had complied with all the officer’s instructions.

“Following a records request from our office sent in mid-August, Salt Lake City today announced it has identified 27 K9 incidents between January 2018 and now, 18 of which are being referred to the DA Office. Today’s disclosure by the City and SLCPD is a vital step toward restoring public faith in law enforcement.

“Our office sent the records request to SLCPD after learning of one serious K9-caused injury only after it was reported publicly by the Salt Lake Tribune on August 11, 2020. At our request the same day, SLCPD agreed to send that case to us for screening. A criminal case was later filed.

“We will review all materials provided to our office in connection with our records request and we will act as appropriate and necessary to fulfill and perform our statutory duties consistent with the law. This means carefully reviewing and investigating allegations of criminal conduct consistent with our role as public prosecutors. The DA Office will file charges on any case that rise to the level of criminal activity.

“I want to thank Mayor Mendenhall and Chief Brown for their efforts to be transparent and to take affirmative steps in the service of justice.”

The video of the ordered K-9 attack on Ryans appears below. It contains disturbing images and adult language. Viewer discretion is advised. 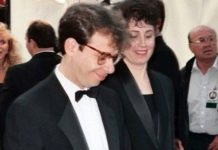 Rick Moranis thanks fans for support after assault in NYC