SOUTH SALT LAKE, Utah, May 11, 2019 (Gephardt Daily) — A 56-year-old man has been arrested after a fatal hit-and-run accident in March for which another man had been jailed.

Richard Bice was booked on suspicion of:

The original suspect, arrested on April 2, is 41-year-old Ryan Conrad Kidrick. He is no longer in custody, online records show.

Bice’s probable cause statement alleges that at about 11:45 p.m. on March 9, Bice was driving his Trailblazer east on 3300 S. toward Main Street when a traffic light changed from red to green.

“The AP (accused person) fled the scene after the crash,” the probable cause statement says of the driver. “The incident was caught on dash camera. The AP ditched the vehicle at 3480 S 300 E. The AP lied about being involved.”

Bice, described in a warrant as a “known gang member,” was interviewed and arrested on Wednesday.

“The AP confessed to being the driver,” the statement says. “The AP gave details that only the driver would know. The AP stated he fled due to having a denied DL (driver license). The AP also stated he uses methadone and was also afraid of getting a DUI.”

The original suspect, Kidrick, was arrested after a witness identified him from a photo lineup.

A probable cause statement filed when Kidrick was charged does not reveal exactly how he was identified as a suspect. It does say that Kidrick lives in the immediate area. Court records show Kidrick has a long criminal history and multiple aliases.

“When I interviewed the RO I discovered the AP lives in this area,” Kidrick’s probable cause statement says. “There was a witness who saw the driver the night of the crash. The witness picked the AP out of the photo line up. The vehicle was ‘ditched’ about a block from the AP’s house.”

The day after the March 9 accident, police searching the area identified a Trailblazer with heavy front-end damage, parked near a dumpster at Le Vail Chateau Apartments, at 3480 S. 300 East.

“It was parked hiding the front end. He called me and I responded,” says a warrant filed in the case on March 26. “The vehicle matched the vehicle involved in this case. The vehicle had severe front-end damage. I could see ‘body slide’ on the front hood of the vehicle. This is where one of the pedestrians slid up the hood. I could also see the body imprint from where the second pedestrian hit. The grill was also missing.”

The Trailblazer was towed and placed into evidence as small details of the vehicle were checked against the accident video, with all matching.

Police learned that the vehicle was registered to Bice, who had reported the damaged Trailblazer stolen four days after the accident. Police noted that Bice was previously associated with the area where the Trailblazer was found.

This is a developing story. Gephardt Daily will have more information as it becomes available. 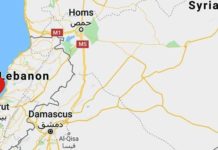