Just hanging out at the Xfinity store in Layton and a truck is on fire. Apparently whoever was in the truck got out

WARNING: The 's' word is heard a couple times in the video. pic.twitter.com/t99CDYXj2x

“Just hanging out at the Xfinity store in Layton and a truck is on fire,” said Twitter user Ryan Comer, who allowed Gephardt Daily to share his video, above. “Apparently, whoever was in the truck got out.”

The fire was reported at about 1:30 or 1:45 p.m., Cook told Gephardt Daily. Crews responded to the area of about 1000 West, in the same area where eateries, including Sonic drive-in, can be found and Target Superstore is across the street.

“A gentleman was in his vehicle, a 2013 GMC Denali truck, and was waiting to make a turn onto Antelope,” Cook said. “We don’t know why yet, but it caught fire, and the fire started in the rear of the vehicle. And he didn’t realize it.

“He got it into park and got out, and the fire was significant,” Cook said. “The truck coasted while heavily involved with fire … It coasted across all four lanes of Antelope, arguably Layton’s busiest road, especially on a Saturday afternoon.”

Against the odds, the driverless truck hit no other vehicles.

“Fortunately, it came to rest against a fire hydrant, otherwise it would have continued to roll into the parking lot of the Target Super Center, and probably hit a number of parked vehicles,” Cook said.

Fire officials arrived and quickly knocked down the truck fire.

The suspected cause, or at least a contributing factor, is believed to be a gas leak, Cook said.

“It (the fire) was spectacular, and kicked off a lot of black smoke. A lot of people posted pictures on Twitter.” 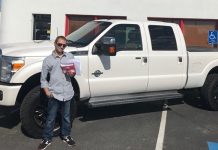 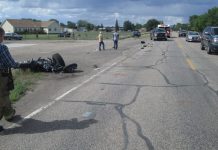 Motorcyclist killed in collision with truck in Panguitch 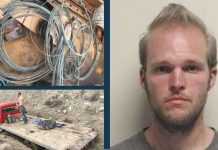