The Tucson Police Department said in a news release that homicide suspects Blane Barksdale, 56, and Susan Barksdale, 59, escaped custody while being extradited from Henrietta, New York, to Pima County, Arizona.

Blane and Susan Barksdale are believed to be armed and dangerous and should not be approached, officials said.

The Marshals Service said in a previous news release there is a reward in place of up to $10,000 per fugitive, for information leading to their location and apprehension.

The U.S. Marshals Service tweeted Sunday it has received new photographs in the search for the Barksdales. The new photos were taken at San Juan County Jail where the fugitives were housed the night before the escape.

“These updated photos of Blane and Susan Barksdale were taken shortly before overpowering the transport team outside of Blanding, Utah,” said U.S. Marshal David Gonzales in a statement on Twitter. “We are asking for anyone who knows of their whereabouts or sees them to the call the USMS or 911 immediately.”

The Barksdales’ direction of travel is currently unknown. They were last seen driving a red GMC Sierra pickup truck, with the Arizona license plate 127XTY, with damage to the front passenger side and rear bumper.

Blane Barksdale is described as Caucasian, 6 feet 5 inches tall and 265 pounds with blue eyes and brown hair. He has numerous tattoos on his arms and hands, officials said. He uses the aliases Jeffery Robert Fehrehbach and Jeffrey Fehrehbach.

Susan Barksdale is described as Caucasian, 5 feet 7 inches tall and 110 pounds. She is not known to use aliases, officials said.

Bligh, whose body has not been found, was reported missing, then on April 16, his home in Tucson caught fire and exploded, according to local news outlets. The next day, his car was found abandoned in Tucson.

The Barksdales were arrested near Rochester, New York, in May on charges of first-degree murder; in addition they are facing charges of burglary, a first-degree felony, as well as arson of an occupied structure, theft of means of transportation, criminal damage and prohibited possession.

The U.S. Marshals Service, FBI, Tucson Police Department and numerous other law enforcement agencies are assisting in this investigation.

Anyone with information about the whereabouts of the Barksdales can call the FBI Tipline at 1-800-CALL-FBI (225-5324) or call 911 immediately. 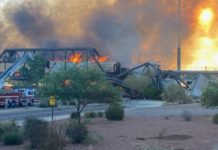