LEHI, Utah, June 11, 2019 (Gephardt Daily) — Officials have identified a man on his first solo hang gliding flight who died when he crashed Tuesday morning at Point of the Mountain.

“He dropped about 50 feet and crashed into the ground,” UCSO spokesman Sgt. Spencer Cannon told Gephardt Daily. “The wind changed and he turned and tried to stay elevated, but he crashed.”

Cannon said the accident was reported a little before 10:30 a.m. The UCSO responded, as did Lehi police and Life Flight, but it was too late.

“People at the scene were trying to help him, but he was not breathing when they arrived, and could not be revived,” Cannon said. “He had sustained fairly serious head injuries.”

The accident happened on the south side of the flight park, which is at 121100 N. East Frontage Road, in Lehi.

Witnesses saw the accident, and provided an account to officials.

“It’s not known whether his inexperience may have contributed to the accident, or whether it could have been avoided,” Cannon said.

Gephardt Daily will have more details as information is made public. 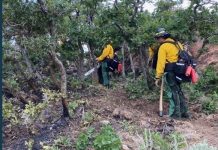