“The search and rescue for the missing toddler, which began on Thursday, has been temporarily halted after three days of search and rescue efforts,” said a news release on Facebook from the Navajo Police Department.

The efforts were initiated on Thursday afternoon after the little girl was reported missing, the news release said.

“The Division of Public Safety began coordinating search efforts with local and state resources after tracking led to McElmo Creek, a creek near her home which flows into the San Juan River,” the news release said.

In this search and rescue, resources deployed included boat teams and divers to search the McElmo Creek while volunteers conducted foot searches of the area with commissioned officers searching the property and local homes, the news release said.

“Drones supplemented the air search efforts along the creek, river and land,” the news release said. “Tips received were investigated and assessed by police officers and criminal investigators.”

“The continued deployment of substantial resources after the three days of aggressive searching by air, land and water-based resources has necessitated a pause by these elements to allow them time to recuperate and time for the services to reassess,” the news release said.

“A decision was made to temporarily halt search efforts Saturday night. This halt will allow Public Safety to organize and secure additional resources for subsequent search efforts. Additionally, the Division of Public Safety is assessing what the impact of the Gold King Mine contamination release that occurred on Thursday will have on the search.”

Community volunteers will continue organizing search teams, officials said. The Navajo Police Department will remain in the community to investigate any leads generated by the volunteers.

A concurrent investigation was also occurring, the news release said. There were no indications of an abduction; the Navajo Nation Amber Alert system was not activated because, by law, Amber Alerts are only generated in instances of abduction. However, Andanndine is listed in the National Crime Information Center as a missing person.

“We are thankful of the overwhelming amount of support and resources that we received throughout the search,” Chief of Police Phillip Francisco said. “We want to thank our local, state, federal partners, volunteers, and the donations made to help us in covering the terrain in finding this little girl. We extend our gratitude and appreciation to the volunteers who covered miles of ground terrain along the creek and riverbed and to the community who donated food and supplies for the volunteers.”

Andanndine is between 3 feet and 4 feet tall and weighs about 35 pounds. She has black eyes and brown hair.

Her first name has been reported by various agencies as Andanndine or Anndine.

Anyone who has seen the child or who may have any information that could help in the search effort is asked to call the Navajo Police Department, Shiprock District, at 505-368-1350 or 505-368-1351. 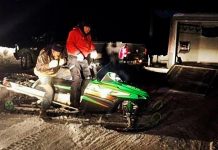 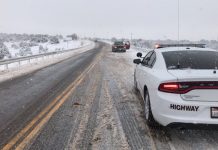 UHP warns drivers of slick roads between Monticello and Blanding 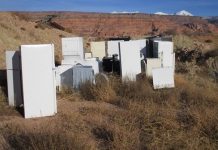