STANSBURY PARK, Tooele County, Utah, May 21, 2019 (Gephardt Daily) — The Utah Highway Patrol has released the name of the Utah man killed just after midnight Tuesday morning when his truck rolled in Tooele County.

The victim is Michael S. Gollaher, age 62 from Lake Point.

A Utah Department of Public Safety statement release later says that Gollaher drifted off the right shoulder of the roadway.

Gollaher ” … was ejected during the roll and sustained fatal injuries.”

SR-36 was was closed in both directions for multiple hours for the investigation. Besides documenting the scene, Judd said another factor was “the amount of debris in the roadway.” 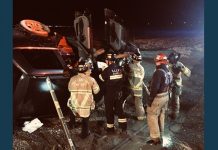