The department said the Consumer Price Index showed decreases in energy and gasoline were offset by increases in the food and shelter sectors. Indices for all items have increased 1.7 percent over the past 12 months, figures show. Prices in medical care, home furnishings and vehicle insurance also climbed for the month.

The CPI measures the average change to U.S. goods and services and typically follows the department’s Producer Price Index to present a snapshot of the American goods market. The PPI was issued Tuesday and showed the greatest decline in producer prices since January.

Thursday’s report also signaled that underlying inflation recessed, an indication the Federal Reserve might cut interest rates at its policy meeting next week. The U.S. central bank reduced rates last month for the second time in a row. July’s rate cut was the first in more than a decade.

“The trend in consumer inflation remains relatively soft with lower energy costs pulling down the CPI in September,” Ben Ayers, an analyst at Nationwide, said in a note to clients. “The odds of a rate cut in October are moving up with domestic economic data turning softer in recent months.” 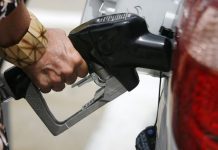