March 31 (UPI) — U.S. stocks dropped at the end of trading Tuesday on the final day of the worst first quarter in American history.

The Dow Jones Industrial Average closed down 410.32 points, or 1.84 percent, while the S&P 500 fell 1.6 percent and the Nasdaq Composite slid 0.95 percent ending a quarter marked by market volatility due in large part to the COVID-19 pandemic.

The decline followed another emergency measure by the U.S. Federal Reserve, which said Tuesday it will begin lending money to foreign central banking systems. The temporary move is intended to keep rates down and stabilize markets under threat from the coronavirus pandemic.

The Fed said the measure should enable the “smooth functioning of financial markets … and thus maintain the supply of credit to U.S. households and businesses.”

The U.S. central bank said the temporary measure, called the FIMA Repo Facility, should aid the U.S. Treasury market by providing an “alternative temporary source of U.S. dollars other than sales of securities in the open market.”

Tuesday’s is the Fed’s latest intervention to support the U.S. economy during the health crisis. Earlier this month, it allowed unlimited purchases for treasury bonds and lowered interest rates to near zero.

The first quarter of 2020, which, due largely to the global coronavirus emergency, is set to conclude on Tuesday as the worst-performing first quarter in American history.

For weeks at the end of the quarter, Wall Street saw wild swings — 1,000-point losses followed by 1,000-point gains — and historic marks. Last week the Dow gained more than 10 percent in value in its greatest weekly performance since 1938. The bellwether index soared more than 2,100 points on March 24, its largest single-day percentage climb in nearly 90 years.

A week earlier, the Dow lost more than 17 percent of its value — its worst weekly performance since the financial crisis in 2008. The index plummeted more than 3,000 points on March 16, and later closed below the 20,000 mark for the first time since early 2017.

“I think the market has established some type of bottom,” Tom Lee, an analyst at Fundstrat Global Advisors, told CNBC. “I don’t know if this is October ’08 here; we still have some wood to chop.”

Goldman Sachs on Tuesday predicted the U.S. unemployment rate will peak at around 15 percent later this year, up from its original projections of 9 percent.

The firm also forecast gross domestic product will fall 9 percent in the first quarter of this year and then 34 percent into the second quarter, the worst period since World War II. In quarter three, Goldman projected that the GDP would turn around, surging 19 percent. 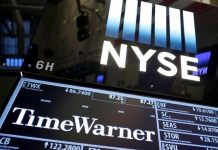 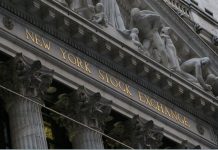