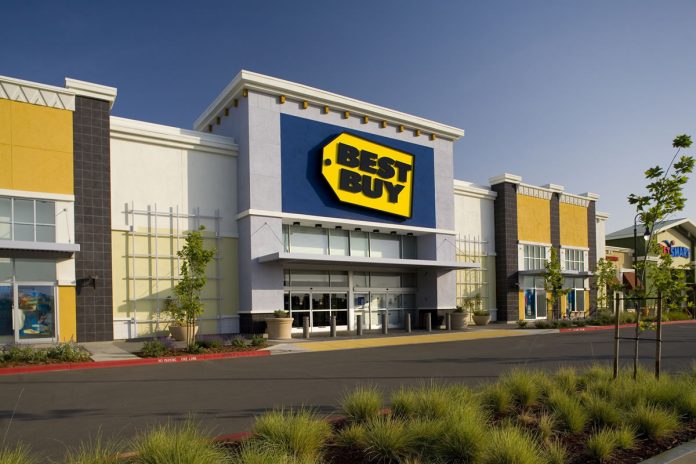 Best Buy said Thursday that sales during the key holiday season rose 2.6%, as consumers were more willing to spend on products including new big-screen TVs and smartphones.
Large-screen TVs and smartphones were “the primary drivers of our year-over-year revenue growth, more than offsetting significant weakness in tablets,” said Best Buy president and CEO Hubert Joly in a statement.

However, shares of Best Buy fell nearly 8% in early trading Thursday on concerns about 2015 sales. The electronics retailer warned that falling prices and expected slow demand for consumer electronics could lead to flat or single-digit declines for the first half of the year.

[/one_fourth][three_fourth_last]
The electronics retailer reported overall domestic revenue of $10.1 billion for the nine weeks that ended Jan. 3, 2015, an increase of 4% over $9.7 billion in the 2013 holiday shopping season. Last year, Best Buy saw an 0.8% decline in holiday sales, in part due to a shorter than usual shopping season that was marked by cold weather nationwide.

Last holiday season, the electronics retailer’s sales were down 0.8% for the nine weeks ended Jan. 4 at stores, websites and call centers open for at least 14 full months. Despite the drop, it was an improvement over the 1.7% decline in the same period a year earlier.

Best Buy’s report is the first from major retailers to offer insight into holiday sales performance. A report from the National Retail Federation on Wednesday raised questions about the strength of consumer spending, which has shown recent favorable signs.

While holiday sales increased 4% over November and December — the best holiday sales season since 2011 — the federation found that for the month of December, sales fell 1.6% at electronics stores, 0.3% at clothing retailers and 0.9% at general merchandise stores.