KINGSTON UPON THAMES, England, Feb. 25 (UPI) — An English county shared photos of a hoverboard graveyard featuring 90 of the devices being destroyed for failing safety tests.

The Surrey County Council said the hoverboards were intercepted by county trading standards officers after being imported from Hong Kong and the self-balancing scooters were sent for electrical safety standards testing.

The council said the scooters were found to have faulty components including defective battery packs that could lead to spontaneous explosions.

The council shared photos on Flickr of the boards being gathered in a graveyard-like setting and destroyed with heavy equipment.

“The dangers of the boards were highlighted during the destruction process when some caught fire and had to be doused with a powder-based fire extinguisher,” the council said on its website.

The destroyed boards were sent for recycling.

“Our focus is on protecting consumers and the swift actions of our trading standards officers have prevented a large consignment of potentially dangerous products ever going on sale,” said Richard Walsh, Surrey County Council’s cabinet member for localities and community wellbeing. 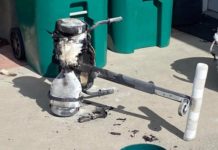