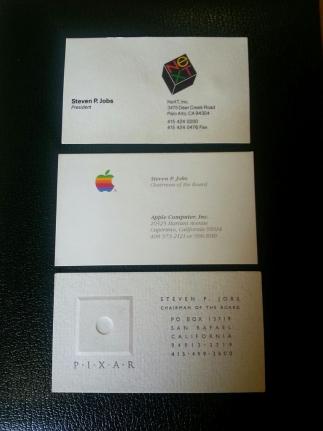 Man Spends $10K on 3 of Steve Jobs’ Past Business Cards

SAN RAFAEL, Calif., May 13 (UPI) — Three of Steve Jobs‘ past business cards were put up for auction at a private high school in California, and sold for over $10,000 to another CEO — that of Stacks.co.

Tim Knowles paid $10,500 for the three cards, each representing a different chapter of Jobs’ life. Used between 1984 and 1990, the cards show the late tech pioneer’s contact information when he was president of NeXt as well as chairman of Apple and PIXAR.

“If there was ever a business card to have in your rolodex — it would be Steve’s — we wouldn’t be doing what we are doing right now if it wasn’t for him!” Knowles told Mic Wrightfrom The Next Web.

The cards were donated by a family who used to do catering for the CEO, a spokesman from The Marin School in San Rafael told Business Insider. The opening bid for the cards was $600.