Saldana and Hutcherson are joined by John Cho, Nina Dobrev, Haim, Minka Kelly, Matt McGorry, Jesse Metcalfe and Jessica Szohr.
“If you don’t get it,” Saldana says of consent, “you don’t get it.” And sex without it? “It’s rape,” Hutcherson said.

The campaign entitled “It’s On Us” describes itself as “a cultural movement aimed at fundamentally shifting the way we think about sexual assault.”

“It’s On Us is a rallying cry inviting everyone to step up and realize that the solution begins with us,” says a post on the groups official Facebook page “It’s a declaration that sexual assault is not only a crime committed by a perpetrator against a victim, but a societal problem in which all of us have a role to play. We are reframing sexual assault in a way that inspires everyone to see it as their responsibility to do something, big or small, to prevent it. We are asking everyone to create an environment, be it a dorm room, a party, a club or a sports team, or the greater college campus, where sexual assault is unacceptable and survivors are supported”

At the end of the video, Saldana and Hutcherson asked people to pledge their support for the campaign. Supporters include EA, GLAAD, NCAA, Planned Parenthood, RAINN, Snapchat, Tumblr and USA, among many others. 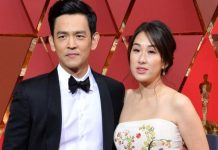 John Cho joins ‘The Exorcist’ for Season 2 on Fox