Dec. 24 (UPI) — About four years after the first accusations were made against him, actor James Franco has admitted that he had sex with multiple female students from his acting school — and that doing so was “wrong.”

Franco made the remarks in a podcast with Jess Cagle, editor in-chief of People magazine.

In 2017, two women accused Franco of sexual misconduct while they attended his Studio 4 acting school in New York City and Los Angeles. In July, he agreed to pay the women $2.2 million to settle the claims.

Franco told the podcast, however, that he did sleep with female students and that he had a sex addiction.

“Over the course of my teaching, I did sleep with students, and that was wrong,” he said. “It wasn’t a master plan on my part, but yes there were certain instances where … I was in a consensual thing with a student and I shouldn’t have been.”

Franco added that he remained silent for so long because he never felt that it was the right time to fess up.

“There were some complaints about me and an article about me, and at that moment I just thought, ‘I’m gonna be quiet. I’m gonna pause,'” he said. “[It] did not seem like the right time to say anything.

“I was in recovery before for substance abuse. There were some issues that I had to deal with that were also related to addiction. And so I’ve really used my recovery background to kind of start examining this and changing who I was.”

Franco told the podcast that he struggled with sex addiction after he quit drinking, and admitted to cheating on all of his former girlfriends.

Franco was nominated for an Academy Award in 2011 for playing hiker Aron Ralston in the film “127 Hours.” The film tells the true story of Ralston’s getting stuck during a hike in southern Utah in 2003 and having to cut part of his arm off to free himself. 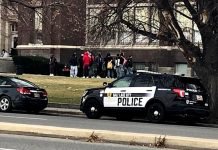 5,600 students in Florida quarantined due to COVID-19