Jan. 19 (UPI) — Adam Levine says wife Behati Prinsloo is due to give birth to their second child “very soon.”

The 38-year-old singer and television personality gave an update on Prinsloo’s pregnancy and shared an embarrassing story from daughter Dusty Rose’s birth while appearing Thursday on “Jimmy Kimmel Live!”

Levine and Prinsloo welcomed Dusty Rose in September 2016. The singer said he ate too much food ahead of his daughter’s birth on Carson Daly‘s advice and nearly pooped his pants while Prinsloo was in labor.

“I ordered a lot of food, because I’m like, ‘I’ve gotta eat a lot of stuff now, otherwise I’ll faint,'” Levine recounted. “I just started going at it. What I discovered about myself is that I’m a nervous eater.”

“So, I’m basically bursting at the seams. Like, I’m going to [expletive] my pants,” he said. “But also, my wife is in labor! It’s the lamest thing to be [feeling] when your wife is going to have a baby. That’s not in any way a viable complaint. So, you’ve got to just keep it inside, literally and figuratively.”

Levine said he “waited, doubled over in pain” so as to not miss his daughter’s birth. He rushed to a restroom “the second the coast [was] clear” and Dusty Rose had arrived.

Levine and Prinsloo, who married in July 2014, announced Prinsloo’s second pregnancy in November. The Maroon 5 singer and “The Voice” coach later confirmed Prinsloo is pregnant with another daughter. 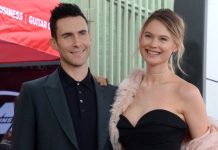 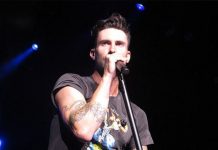 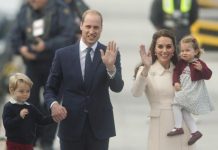