NEW YORK, Sept. 2 (UPI) — Alicia Keys stopped by “Today” to talk about her new music and makeup-free movement and inspired the show’s anchors to remove their own makeup on camera.

“You don’t have to be what people tell you,” Keys said to anchors Tamron Hall, Billy Bush and Al Roker.

Seemingly moved by Keys’ message, the anchors took makeup remover wipes and started taking off their stage makeup during the interview.

“You don’t even look like you have makeup on anyway,” Keys told Hall as she helped her wipe it away.

“It’s not about makeup,” Keys said. “Look, I love makeup too. It’s about how you feel. It’s about who you are. It’s about just being who you are and not letting anyone tell you who you should be. Even this conversation shows our obsession of the standard we hold women.” 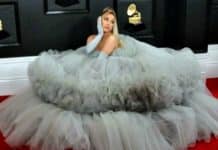