The Showtime series confirmed in a tweet Tuesday that Manson, 50, will play a death metal singer and ancient berserker in the new season.

Deadline said Manson’s character, Johan Wengren, fronts the Viking death metal band Blood Death. Wengren and his band are a source of power for Wednesday’s war with the New Gods.

“As a longtime admirer of his estimable talent as an author, artist, musician and actor, it is dope indeed to be working with Mr. Manson in Season 3 of ‘American Gods,'” showrunner Chic Eglee said in a statement.

“Bringing his specific energy, wit and boundless enthusiasm for all-things-Neil Gaiman to the role of Johan, a Norse ‘berserker’ in service to Odin, his performance promises to be disturbing, original and uniquely entertaining,” he added.

“American Gods” is based on the Neil Gaiman novel of the same name, and premiered on Starz in 2017. The series stars McShane, Ricky Whittle, Emily Browning and Crispin Glover, and was renewed for a third season in March. 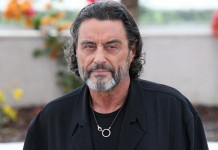 Ian McShane on ‘Game of Thrones’ Spoiler Outrage: ‘Get a Life’