EL PASO, Texas, Feb. 21 (UPI) — Ron Stallworth, whose Black Klansman memoir is the basis of the Oscar-nominated Spike Lee film, is at a commanding vantage point to talk about racism in America.

“We have moved forward, but we still are gripped by the past,” Stallworth told UPI in a recent interview in his hometown of El Paso, Texas. “White supremacy has always been a part of our fabric. Our nation was founded on the principle of white supremacy and white privilege. These still exist today.”

It took nine months in 2013 to write Black Klansman: A Memoir about his going undercover with the Ku Klux Klan to prevent racist violence in Colorado decades ago. The improbable story of a black police officer befriending white racists resonates to the present. When legendary filmmaker Lee read the book, he decided he wanted to direct it.

Stallworth, 65, says he is not a radical. He would rather call himself a nonconformist, preferring the moniker “silent protester.”

Even though El Paso was a “Southern city in a Southern state” when he was growing up from 1953 to 1971, Stallworth said it “never had the racial problems we were seeing on the evening news about the Deep South.”

“I was never a militant during the ’60s’ black revolutionary era. I was never one to constantly go around yelling ‘black power’ and all that stuff and get involved in marches and protests. I did challenge the system, but I did it on my own terms and in my own way,” he said.

Story begins in the ’70s

Stallworth’s story describes a seven-month undercover investigation of the KKK in the late 1970s. As a Colorado Springs Police Department officer hungry for undercover work, he responded to an ad the Klan placed in the local newspaper seeking new members.

Stallworth used his real name and gave an unlisted Police Department phone number. When the Klan phoned, he impersonated a white racist, saying how much he hated black people. This was a ruse to investigate the group’s activities.

His subterfuge succeeded and the Klan members agreed to meet him. But any in-person meeting meant his deception, and the undercover investigation, could survive only by sending a white police officer in his stead. Stallworth’s superiors agreed.

The undercover investigation also kept tabs on white supremacist David Duke, who was then grand wizard of the KKK. Stallworth had to speak to Duke, who was planning a visit to Colorado Springs.

The book and movie paint Duke as the modern Klan’s founder, a deft political operative who took his organization mainstream. Duke’s role in Stallworth’s story allows director Lee to connect America’s racial past to its present.

Sometimes, the director had to depart from the book to make these connections. Stallworth said he knew Lee would have to rework his memoir for big-screen success, and the contract granted permission for any departures from the book. He said he was gratified the producers asked his opinion about the changes.

“For instance, we had racial problems in the Colorado Springs Police Department, but nothing like depicted in the film,” Stallworth said. “It’s Hollywood. They have to embellish some aspects that are true. I knew that going in. I have absolutely no complaints with how the movie turned out.

“I tell people 80 percent of the book is in the movie, and the other 20 percent is ‘creative screenwriting.'”

The deadly Charlottesville, Va., clashes in 2017 motivated Lee to make the movie, Stallworth said. During a neo-Nazi rally, a white supremacist rammed a car into peaceful marchers protesting the “Unite the Right” racists, killing Heather Heyer and injuring 40 others.

“Spike wanted to get this movie out on the first anniversary of Charlottesville. He wanted to make a statement. He’s outspoken. It’s one of the things that I like about him,” Stallworth said. Lee dedicated his movie to Heyer.

Duke was at the Charlottesville rally, shown on video promoting white supremacy. Lee uses Duke in Stallworth’s story in the 1970s and in 2017 to remind audiences that racism in America continues.

“My story has resonated so much because Trump is in the White House,” Stallworth said of President Donald Trump. “The Charlottesville incident is the classic example. Trump had the chance to renounce racism, and he let that chance go by and defended the neo-Nazi protesters.

“I wasn’t trying to focus on any aspect of American society. It just so happened that my story was timely because what was said to me 40 years ago by David Duke and his Klansmen, Donald Trump was saying and is still preaching today.”

When the film was released in August, Duke called Stallworth, fretting over Lee’s depiction of him. The men had not spoken in 40 years. For an hour, Stallworth confronted Duke with facts from his past. But Duke did what all racists do, Stallworth said, and turned the facts upside down.

“Every time he was cornered in an area where he didn’t want to go any farther, he would change the subject,” Stallworth said. “I pointed out to him that he was at Charlottesville. That it’s in the movie. And when I pointed that out to him, he changed the subject.”

To Stallworth, white supremacists are cowards, and he says “there is no reason to fear cowards.”

He added: “The days of us cowering in fear at mention of the Klan are long gone.”

Stallworth’s experiences in Colorado Springs, including the making of the movie and its award nominations, and the recent conversation with David Duke, have a surreal quality, he said. The fame BlacKkKlansman has brought Stallworth leads people to tell him he is living his dream.

“I tell them I’m not,” said Stallworth, who retired back in El Paso after a 32-year career in law enforcement. “I never dreamed any of this. All I ever dreamed of being was an undercover narcotics officer.” 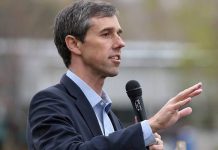 Texas Rep. Beto O’Rourke on migrant separations: ‘This cannot be us’