March 16 (UPI) — Netflix is giving a glimpse of the new series “Our Great National Parks.”

“Our Great National Parks” celebrates and explores “the power of our planet’s greatest national parks and wild spaces.” Obama serves as narrator.

“This is a journey through the natural wonders of our shared birthright,” the former president says in the trailer.

Obama and his wife, former first lady Michelle Obama, signed a multi-year deal with Netflix in 2018. The couple have since executive produced the Netflix series “Waffles + Mochi” and “We the People.” 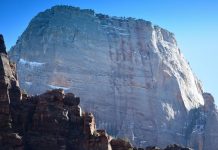