PHILADELPHIA, July 29 (UPI) — Fans of Bradley Cooper‘s performance in American Sniper have taken to social media to complain about the actor attending the Democratic National Convention on Wednesday in Philadelphia.

Social media outlets were flooded with calls to boycott Cooper’s films, many confused as to how Cooper could play Navy SEAL Chris Kyle and then sit through the DNC.

Kyle, referred to as the deadliest sniper in US military history, has been seen as a conservative icon. Kyle was killed at a Texas gun range in 2013.

In 2008, Cooper donated $750 to Hillary Clinton‘s campaign, and has spoken out in favor of gun control and Obamacare. 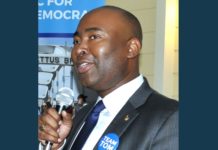