Set to premiere on HGTV on Monday, the home makeover show follows Christopher Knight, Mike Lookinland, Maureen McCormick, Susan Olsen, Eve Plumb and Barry Williams as they team up with experts to make the inside of a house used for exteriors on The Brady Bunch look like the faux interior that was created in a film studio.

“We’ve taken something that’s just in memory and on celluloid and we’ve made it real, and there is a fabulous feeling from that,” Knight, 61, told UPI in a recent phone interview. “The show is all about not just the challenge of pulling it off and being effective with this transformation, but also what that transformation does to all of us.”

Being together in that setting without Henderson, Davis and Reed made the experience an emotional journey.

“They would have loved to have been part of it,” said Knight, who played Peter Brady. “So, in those moments where they are brought up, it brings a tear to everyone’s eye because it was a tight group. It was a family and we are all not there.”

Still, the cast sensed the late actors’ presence throughout the filming of A Very Brady Renovation.

McCormick, 63, told UPI that she felt “totally transported back in time.”

“When I first walked in that front door, I had goose bumps, and I saw Bob Reed and Florence sitting in the two chairs opposite the couch along that wall. I saw Ann B. Davis coming in from the kitchen with a big spoon in her hand,” said the actress who played Marcia Brady. “I was so close to them.”

McCormick said she is grateful that she and Henderson, who died in 2016, connected even more deeply toward the end of her TV mom’s life and after both had competed in different seasons of Dancing with the Stars.

“I really feel like she taught me a lot that I take with me now each and every day. I was going to Texas a lot and visiting Ann. And Bob Reed, of course, went way too soon. I shared a love of gardening and roses with him. It’s been incredibly bittersweet,” McCormick said.

“They were such wonderful professionals,” said Plumb, 61, who played Jan Brady. “It got very emotional when we were standing there thinking about them.”

Although fans have made pilgrimages to the Brady house in Studio City, Calif., for decades, the cast actually filmed its scenes on the Paramount studio lot about 5 miles away. The house was used as an establishing shot to let viewers know where the action was taking place.

When the house went up for sale, the actors’ friends urged them to buy it, even though they had no solid connection to it.

McCormick followed the story in the media and was elated when HGTV finally bought the house.

“I was so happy, but, yet, I was like, ‘What are they going to do with it?’ Because I really feel like it was my house,” McCormick said.

The actors — who all have some experience with renovation or design — were intrigued when HGTV invited them to help with the transformation of a modest split-level ranch into a house with a huge staircase, attic, den and four bedrooms.

“Susan and I were very vocal in our opinion that there is no way it can be done,” Knight said.

“It seemed like quite the challenge to me because the original house didn’t have a second story in the back, so the fact that they were able to change the elevation to hide that second story from the street was amazing and they added 2,000 square feet and had it all fit and be the same scale as the set,” Plumb said.

There were no blueprints for the fake house, so to duplicate it in real life, the contractors, architects and builders studied the show to get everything right.

“If they couldn’t find it, they made it,” Plumb said of the “care and detail” given to recreating the renovated house’s furnishings.

Designers reproduced discontinued fabric and wallpaper to match those seen on the original show, while some hard-to-find, must-have items were crowd-sourced. A 1950s-era refrigerator was snatched up in Minnesota, for example.

“It’s a faithful recreation. It’s a museum piece,” Knight said, acknowledging that recreating a place so important to his childhood has been a bit surreal.

“We’re not kids anymore. It’s like, ‘Who’s that old person?’ That’s the disconnect. Being now yourself, at this age, inside of the set, it’s a wild experience.”

Although they have known each other for most of their lives, A Very Brady Renovation allowed the actors to see different sides of each other.

McCormick said she has enjoyed watching the “At Home with the Bradys” videos HGTV filmed for each of the actors, who haven’t all collaborated in 15 or 20 years.

“It was wonderful to have insight into their lives and into what they were doing,” McCormick said. “Everyone is so crazily different, just like in a real family.”

Added Plumb: “We are all very friendly and get along just fine and it was fun to get to work with them in a new way because we’ve acted together, we’ve sung and danced together, so it was great to work with power tools together.”

To celebrate the premiere of A Very Brady Renovation and the 50th anniversary of The Brady Bunch, the actors will also be seen in upcoming episodes of Fast N’ Loud, Chopped, Worst Cooks in America, The Kitchen and The Pioneer Woman, which air on HGTV’s sister stations Food Network and Discovery Channel.

The Brady Bunch — a comedy about a blended family with six kids — initially aired 1969-74 and remains popular in reruns. The original show was also followed by several TV movies, reunion specials and spin-offs. 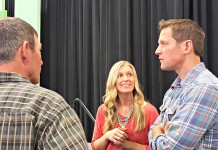