May 3 (UPI) — New York Governor Andrew Cuomo announced on Monday that capacity restrictions in New York City will be lifted on May 19, including Broadway theaters.

Restaurants, museums, movie theaters, retail stores and more will also be having their capacity restrictions lifted in New York City on May 19.

Cuomo mentioned that even though Broadway will be allowed to reopen on May 19, it doesn’t mean shows will be taking place right away.

“Broadway for example has a schedule. They have to produce a play before they can sell the play, so there is a schedule for them. But from a capacity point of view, they can all reopen on May 19,” Cuomo said.

New York City Mayor Bill de Blasio previously said in March that Broadway was aiming to reopen by the fall.

Broadway performances were initially suspended in March 2020 and then canceled for the remainder of 2020 due to the COVID-19 pandemic. 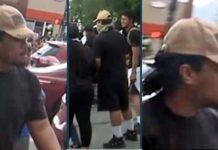