Feb. 8 (UPI) — Rock ‘n’ roll icon Bruce Springsteen can now be seen urging Americans to come together in a commercial for Jeep called “The Middle.”

The two-minute ad was released Saturday on the eve of the Super Bowl NFL football game.

The video shows Springsteen traveling in the Midwest region of the United States in a Jeep.

Seen along his journey are a chapel, train, wheat field, diner, horse and American flags. It has gotten nearly 8 million views since it was posted on YouTube.

“It’s no secret. The middle has been a hard place to get to lately — between red and blue, between servant and citizen, between our freedom and our fear. Now fear has never been the best of who we are,” Springsteen said.

“And, as for freedom, it’s not the property of just the fortunate few. It belongs to us all. Whoever you are, wherever you are from. It’s what connects us and we need that connection. We need the middle. We just have to remember the very soil we stand on is common ground.”

The commercial closes with the words, “To the Reunited States of America.” 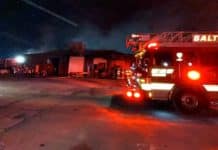