Aldean and Underwood won Collaborative Video of the Year for their song, “If I Didn’t Love You.” In their acceptance speeches, the duo thanked each other and the team behind the music video.

Lainey Wilson and Cole Swindell then performed “Never Say Never” together in the rain on the outside stage on Broadway.

After the opening performances, co-host Anthony Mackie started the show with a quick shoutout to fellow co-host Kelsea Ballerini, who was forced to team up with Mackie from home after she tested positive for COVID-19.

Mackie welcomed Kane Brown to the stage as an informal co-host. While Mackie talked with Brown, Thomas Rhett and Martina McBride were among those who jokingly volunteered to replace Ballerini, who then made her first virtual appearance from inside her home.

Little Big Town provided the third performance of the night with their latest single, “Hell Yeah.” It is the band’s first single in two years and will be on their forthcoming 10th studio album.

Parker McCollum followed up Little Big Town with a short performance of “To Be Loved by You.”

After McCollum wrapped up, comedian Rob Corddry presented Aldean and Underwood with the Collaborative Video of the Year award.

Brown and Mackie then introduced Carly Pearce, who performed “Diamondback.” Shortly after, Old Dominion performed “No Hard Feelings” on an outside stage.

You heard her! You ain’t gonna get this diamond back @carlypearce just gave a shining performance of “Diamondback” #SeeHerHearHer @SeeHerofficial pic.twitter.com/j8PmtgeZEA— CMT (@CMT) April 12, 2022 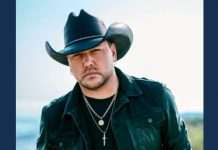 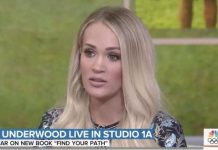