July 8 (UPI) — Comic actor Larry Storch, best known for his portrayal of the zany Corporal Agarn in the classic 1960s television comedy “F Troop,” has died, his manager said. He was 99.

A post on the actor’s official Facebook page said he “passed away in his sleep overnight. We are shocked and at a loss for words at the moment. Please remember he loved each and every one of you and wouldn’t want you to cry over his passing. He is reunited with his wife Norma and his beloved “F Troop” cast and so many friends and family.”

Storch, a New York native who appeared in scores of films and TV shows throughout a long career, earned an Emmy nomination in 1967 for outstanding continued performance by an actor in a leading role in a comedy series for his work as Agarn in the western spoof “F Troop.”

The show only lasted for two seasons on ABC in the mid-1960s but gained a devoted cult following in the following decades due to syndicated reruns.

In the show, Storch played the energetic but not-too-bright protegee of Forrest Tucker’s scheming Sergeant Morgan at the fictional Fort Courage in the 1860s U.S. West. The show also co-starred Ken Berry as the greenhorn Captain Wilton Parmenter.

The politically incorrect show, which featured White actors playing caricatures of Native Americans, was a potent blend of slapstick, physical comedy and stinging one-liners delivered at a breakneck pace.

A World War II U.S. Navy veteran, Storch was close friends with fellow New Yorker Tony Curtis, whom he first met as a radio operator in the Marshall Islands. After the war, Curtis became a movie star and insisted that Storch appear with him in movies such as “Captain Newman, M.D.” (1963), “Sex and the Single Girl” (1964) and “The Great Race” (1965).

Storch began as a stand-up comedian and impressionist working the Catskill Mountains resort circuit in the 1940s. He first broke into television in the next decade and spent the next 30 years appearing on such hit comedies as “Married… With Children,” “Fantasy Island,” “The Love Boat,” “Get Smart,” “Love American Style,” “Gilligan’s Island” and “Car 54 Where Are You?”

In addition to the regular television and movie appearances, Storch also had a bustling career as a voice artist in animated series. There his credits included roles on popular cartoons such as “Tennessee Tuxedo,” “Sabrina, the Teenage Witch” and “The Brady Kids.” 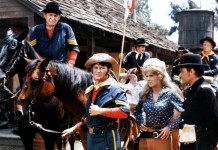 ‘F Troop’ actress Melody Patterson Dies at the Age of 66