NEW YORK, July 30 (UPI) — A corpse flower bloomed this week at the New York Botanical Garden in the Bronx for the first time in nearly eight decades.

“Whenever the rare Amorphophallus titanum blooms, it causes a sensation,” the garden said in a news release.

“Perhaps it is because it is one of the largest flowers in the world and its blooming cycle is unpredictable, but more likely it is due to the infamous odor it releases during its brief 24 to 36-hour peak bloom — like the smell of rotting meat, the reason the plant is more popularly known as the corpse flower.

“Native to Sumatra in Indonesia, it first bloomed in the Western Hemisphere at the New York Botanical Garden in 1937, and after almost 80 years on Thursday, July 28, it has finally bloomed again at NYBG.”

The plant typically grows 12 feet tall in its natural habitat and about 6 to 8 feet in cultivation. A young corpse flower takes about 7 to 10 years to store enough energy to begin its bloom cycle. 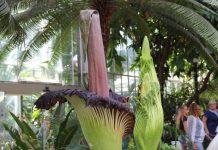