Jan. 15 (UPI) — Dolores O’Riordan, lead singer of the Irish rock band The Cranberries, has died in London, her publicist said Monday. She was 46.

Her representative told the BBC in a statement the musician was in the British capital “for a short recording session.”

“No further details are available at this time,” the statement said. “Family members are devastated to hear the breaking news and have requested privacy at this very difficult time.”

The band is known for its hit 1990s songs “Dreams,” “Linger” and “Zombie.” It toured for part of last year, but canceled numerous dates due to O’Riordan’s “medical reasons associated with a back problem.”

O’Riordan, who was diagnosed with bi-polar disorder, split from Don Burton, her husband of 20 years, in 2014. They have three children together.

The Independent newspaper cited police as saying they are investigating the death of a woman in her 40s, though they did not confirm her identity.

The death is being treated as unexplained. 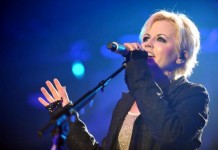