Variety reported Carroll died Friday at her home in Los Angeles after a long battle with cancer.

Carroll was known for playing widowed nurse and single mother Julia Baker on the NBC sitcom “Julia,” which debuted in 1968. Carroll was the first African-American woman to star in a non-stereotypical role on her own primetime network series.

“We were saying to the country, ‘We’re going to present a very upper middle-class black woman raising her child, and her major concentration is not going to be about suffering in the ghetto,'” Carroll said in a 1998 interview with the Television Academy Foundation.

In addition, Carroll portrayed Dominique Deveraux on the ABC soap opera “Dynasty” in the 1980s. Dominique was the first prominently featured African-American character on a primetime soap opera.

Carroll was born in New York in July 1935, and started modeling as a teenager. She came to fame after appearing on the reality competition “Chance of a Lifetime,” and made her film debut in “Carmen Jones” (1954), starring Dorothy Dandridge.

Carroll also appeared in musicals, including “House of Flowers” (1954) on Broadway, and the film version of “Porgy and Bess” (1959). She became the first black woman to win the Tony Award for Best Actress in 1962 for her role in “No Strings.”

Carroll was diagnosed with breast cancer in 1997. She told Spectrum Health in 2016 that she hoped to leave a positive legacy behind.

“She came, and with the gifts and surprised that she was given, she did the best that she could,” Carroll said. “That I cared, not just for my family but for others … And that I did the best work that I could possibly do. I like to think of myself as one of the early role models.” 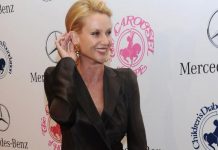