The film also stars Robert Redford as an old wood carver named Mr. Meacham who is known for sharing stories about a dragon. Wes Bentley and Oona Laurence play a father and daughter who help Grace in her quest to uncover Pete and Elliot’s origins.

“Pete’so Dragon” was directed by David Lowery, who wrote the screenplay with Toby Halbrooks, based on a story by Seton I. Miller and S.S. Field.

It’s expected to be released in theaters on Aug. 12. 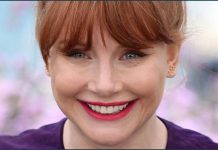