The estranged member of a prominent New York real estate family, Durst, 72, received an 85-month prison sentence in a plea bargain in U.S. District Court in New Orleans. Under the agreement, he will be transferred to a Los Angeles-area prison and face murder charges in the 2000 death of Susan Berman, a friend who reportedly knew the details of the 1982 death of Durst’s first wife, Kathleen.

The agreement says he must be arraigned by Aug. 18.

Durst was arrested in March in New Orleans on weapons charges and and faces additional charges in Berman’s death. He has also been implicated in the 1982 disappearance of his first wife, Kathleen, and the 2001 dismemberment of a neighbor, Morris Black.

Durst’s convoluted life was the subject of The Jinx: The Life and Deaths of Robert Durst, a six-part documentary on HBO. At one point in the filming, he was heard muttering, “There it is. You’re caught. What the hell do I do? Killed them all, of course.” 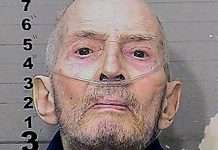